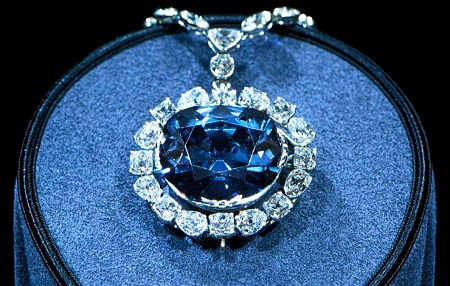 The Tavernier, or Hope Diamond is arguably one of the most famous jewels in the world with an intriguing history. Originally found in the Kollur mine in India, this incredibly rare, vibrant blue diamond is a whopping 45.52 ct stone, with an estimated value of $200–$350 million USD. The stone exhibits a strange and eerie luminescence, adding to it’s mystery: it glows red in the dark which remains for some time after the light source has been removed, as a result of it’s chemical composition:

During the 1600’s the diamond was stolen by a French merchant who sold the jewel to King Louis XIV, waking the curse. The thief was paid a handsome price for the gemstone, but was later ripped apart by wild dogs!

Tragically, almost all of King Louis children and grandchildren died after he acquired the stone, before he died of gangrene. It seems the stone stayed in the family, and in 1792 King Louis XVI and Marie Antoinette were beheaded during the French Revolution, this has also been blamed on the stone’s curse.

Even after all this, the diamond was stolen a second time – ending up in the possession of King George IV, who died completely destitute, his debts were so colossal that the stone was sold after his death. It’s ownership changed several times following this, notably to Evalyn Walsh Mclean, a daughter of a multimillionaire. Ignoring the curse, Evalyn loved the diamond, but her life was plagued with tragedy since wearing it. In 1919, her eldest son Vinson was hit by a car and killed in front of their estate at the age of nine. Her husband Ned drank heavily, was eventually declared insane and died in a psychiatric hospital. In 1946, Evalyn’s only daughter, Evalyn McLean Reynolds, died of a drug overdose at age twenty-five. Evalyn never fully recovered from this loss, and died shortly after of pneumonia, after which it was sold to Harry Wilson, a New York diamond merchant, who donated it to the Smithsonian Museum of Natural History, Washington D.C, where is resides to this day.

Some people say that the final, kind act of it’s donation to the museum has has broken it’s hex, but would you risk the curse of The Tavernier Diamond?

Sign up to our newsletter and we’ll update you with our latest arrivals and dazzling promotions on your favourite jewellery brands!
To say thanks for signing up, we’ll give you 10% off your first order with purchase over £50